To visit the Trades House of Glasgow, please click on the button below. 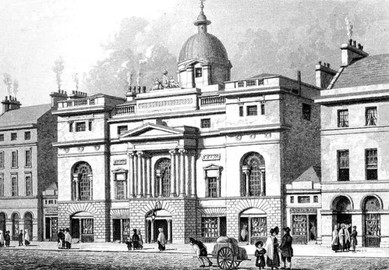 Trades Halls with small pavilion roofs to left and right, prior to the extensions of 1837. The bottom floor consisted of six shops whose rent helped with the upkeep of the Halls.
Trades Halls of Glasgow
It may be of interest to note that there are two distinct parts to our ancient organisation.  The Trades House is the oldest and its history goes back to the letter of Guildry in 1604.   The Trades House can be viewed as the people who make up the organisation. 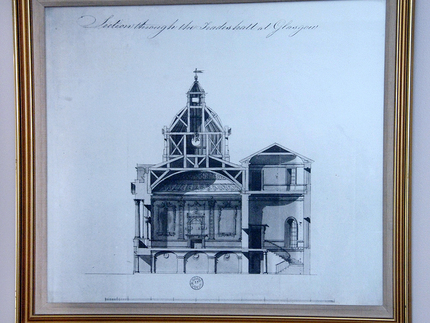 Section through the Trades Halls from Robert Adam's original plans.
The building construction started in 1791 and was completed in 1794.   The architect was Robert Adam and the building is the second oldest still used for its original purpose in Glasgow, the oldest is Glasgow Cathedral.

Sadly, Robert Adam died in 1792, before the Trades Halls were completed and it was his younger brothers, James and William Adam that saw the building finished.

By clicking on the image above you will be able to see what Adam's plan for the building was.   It is likely that his brothers altered the design after Robert Adam died in 1792.

For a history of the Trades House and the Trades Halls please download the following file, History.