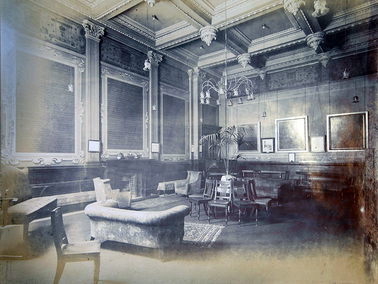 Saloon circa 1903.
Saloon
The Saloon is the second largest formal room in the Trades Halls and is used for formal and social occasions.   The social occasions vary greatly from Dinners to musical evenings.

When the Trades House was built in 1794, this room did not exist and it was added in 1838 by the architect David Hamilton.   The Trades Hall required modernisation and more facilities, hence the construction of the Saloon, cloakroom facilities below the Saloon and a Schoolroom accommodation above.   The Saloon was refurbished by John Keppie in 1916, during the Great War.   Keppie's work in 1916 included the new mahogany panelling which records donations to the Trades House and the Incorporations.

The photograph to the left was taken prior to Keppie's work and the donations can be seen on the walls as can the crests of the fourteen Incorporations.   The ceiling has also been considerably altered.

The room has a completely different feel to it, with sofas and quaint electric lighting.  The room now sports fine electroliers which were purchased from the Grosvenor Restaurant in Gordon Street after it was destroyed by fire in 1970.   The ceiling was replaced in 1955 by Walter Underwood, Keppie's ceiling had become badly cracked following a minor earthquake in 1932.

On three sides of the room, the mahogany panelling proudly displays the names and donations left in mortification.   Often the currency used was Merks (2/3 of a pound),Scots and Sterling pounds.   The Scots pound was worth 1/12th that of the Sterling (English) pound.   But with inflation the amounts donated were considerable. 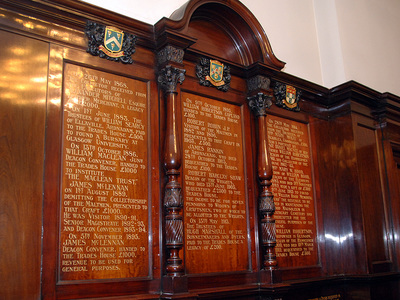 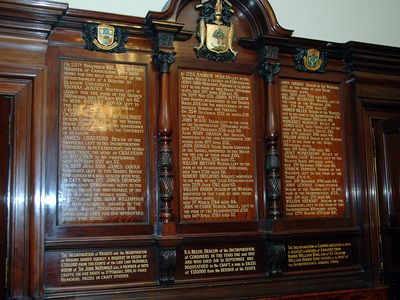 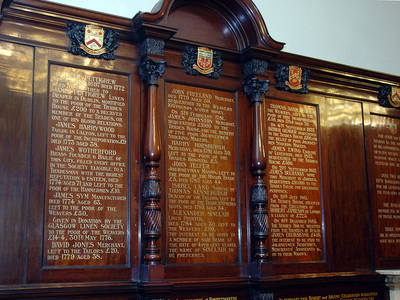 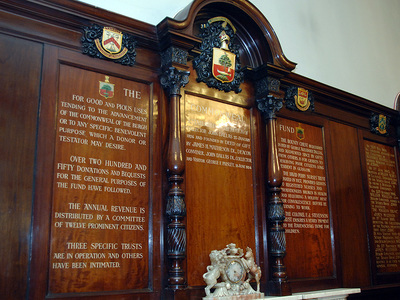 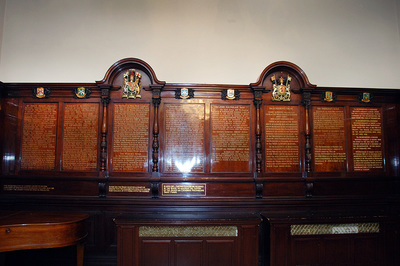 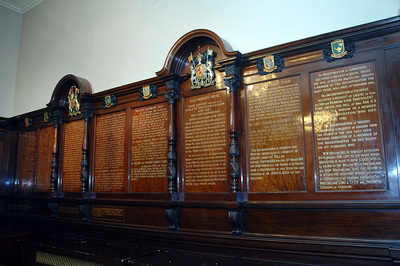 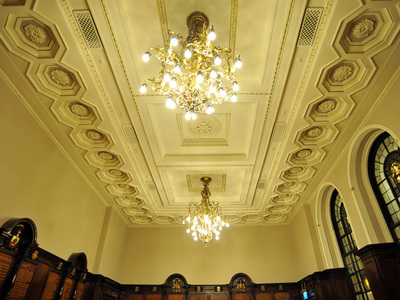 The second Robert Adam's fire place from the Grand Hall was moved to the Saloon in 1916 and it has an onyx clock on top of it.   This clock was made to commemorate Queen Elizabeth II Coronation in 1953.   The fire screen in front of the fire was made by Past Deacon Convener

The fireplace, clock and fire screen can be seen below:: 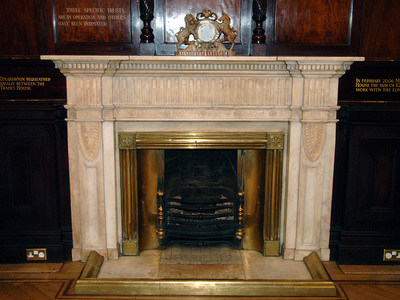 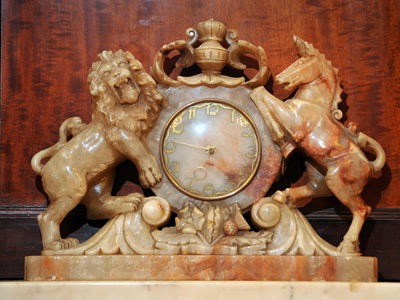 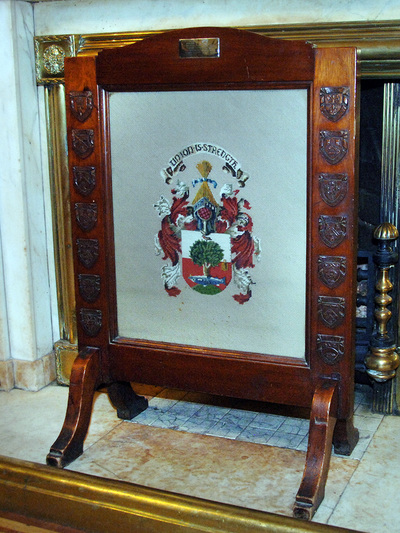 When the Trades House meets, the Saloon is laid out like a traditional Council Chamber or Parliament Hall with a large table down the middle.   The Deacon Convener, Collector of the House sit at its head along with the previous Convener and Collector.   The Deacons and Visitor sit down the central table in craft order.   The other trade representatives sit behind their deacon. 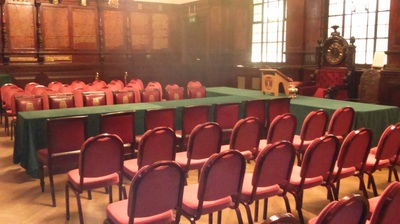 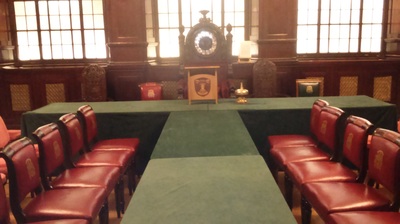 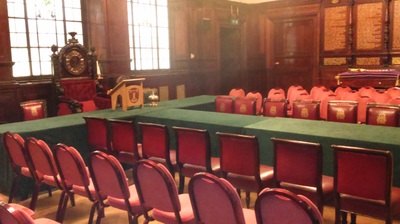 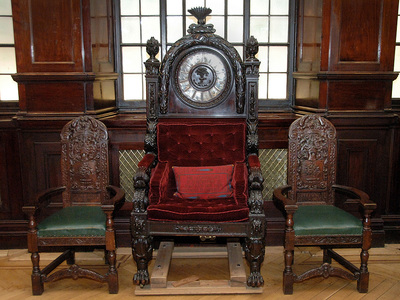 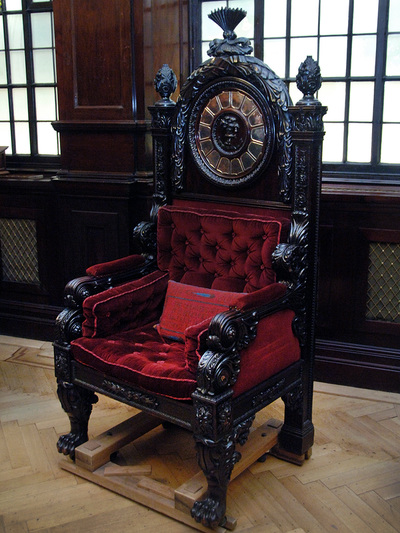 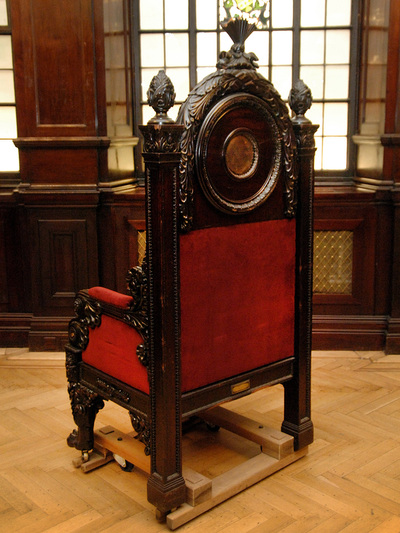 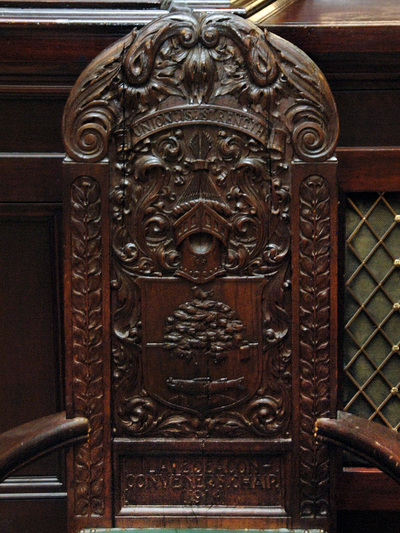 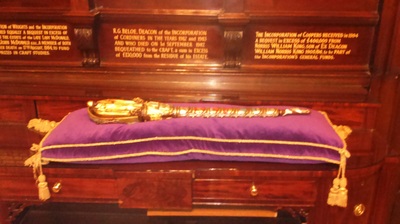